To share your memory on the wall of Raymond Sandoval, sign in using one of the following options:

Provide comfort for the family of Raymond Sandoval with a meaningful gesture of sympathy.

Receive notifications about information and event scheduling for Raymond

We encourage you to share your most beloved memories of Raymond here, so that the family and other loved ones can always see it. You can upload cherished photographs, or share your favorite stories, and can even comment on those shared by others.

Posted Apr 19, 2020 at 06:36pm
I am so sorry for the loss of Ray. He was such a wonderful man. He and I had similar afflictions and would compare notes every time we saw each other. He always has hope and made sure to tell me to keep up the good fight as well. The Sandoval family has been so good to me over the years and my heart goes out to all of you during this trying time. I know Ray is at peace and pain free. Someday we will all reunite with him in heaven and boy, what a party we will have! I hope they have Washers in heaven because that's probably the only time I will actually win! My prayers go out to all of you. I love you all.
Love,
Sarah Heath
Comment Share
Share via:
DW

Posted Apr 15, 2020 at 05:10pm
Although decades went by before we were reacquainted, you always made it seem we had just seen each other yesterday. We’ll miss your kind heart quick wit, and big smile. Rest easy, cousin.
Comment Share
Share via:
PM

Posted Apr 15, 2020 at 02:20pm
Raymond was a kind and gentle soul. A big teddy bear. His wit was a little stand offish but he could always get in a good zinger when you least expected it. He loved his family and he loved his grandkids. He is no longer suffering or in pain. He has gone on to a much better place. He will be missed by. God bless you my friend. Patty Millsap

Posted Apr 14, 2020 at 11:35am
Ray, will never forget you and your gentle smile....your infectious laugh....your warm and fun personality. So many childhood memories to include your family visits to CO, our visits to CA, going to the carwash at midnight to wash your beautiful car, going to the beach, going to Red Rocks for an America concert, my 16th birthday to Casa Bonita and our scary ride home...so many memories. Wish we could have made more memories as adults...life gets in the way. Will remember you always....Rest in Peace Ray...may you always be happy and pain free in our Savior's Kindgdom....Love to you....
Comment Share
Share via:
VY

Posted Apr 14, 2020 at 09:30am
Ray, I will never forget the fun times with you as kids. I will never forget your smile and laugh. Thank you for regularly calling my Mom and Dad (Lucy and Phil Trujillo). They loved and will miss your phone calls. Rest in peace, my dear cousin.
Comment Share
Share via: 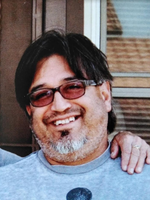