To share your memory on the wall of Patrick Cager, sign in using one of the following options:

As a young boy Patrick was a member of the Sunshine band at Holy Assembly Church where he learned his favorite bible verse John 3:16. Patrick also went to the drive in church for the handicapped people, which was held at the National City drive in movie theater. his Uncle Nathanial and his wife Rosie whom was in a wheel chair went there and the family followed so everyone could worship together. Later in life Patrick began to go to church with other family members. One day he came home and said to his mom, " Mom guess what I got baptized today". She was so upset and said to him " Boy why didn't you tell me, I would have to be there". But just like Patrick's nature he didn't want the spotlight to be on himself he always wanted to praise others. Patrick would hlp his dad get ready for his job as a police officer and was very proud of him. He told everyone his father was a cop, especially in times of need. Patrick was truly a mommas boy though. He loved to watch and eat his mothers cooking. From watching her he learned to cook and would often try out his recipe's on his friends, Patrick and his sister Tiffany were very close and would hang out together, play Atari, watch award shows together, talk on the phone almost daily, compete in cooking etc. He was truly loved by his family.

In his junior high years the family lived in the flourishing neighborhood of Skyline, where he continued to be social making more life long friends that are like brothers today. Patrick's family was known for having parties on weekends and holidays. Because of his exposure to music, Patrick became extremely focused on teaching himself to play many instruments and learn all the songs he heard his parent's playing around the house and on the radio.

Patrick attended the esteemed Morse High School where he loaned his musical talents to the Morse High School Marching Band. He enjoyed the jam sessions in the stands during the football games and Marching in the many parades around San Diego. He was always excited to march in the Martin Luther King Jr. Parade where he would say "Now we can really goet down". Patrick graduated from Morse High School in 1990.

After high school he enlisted in the Navy and served on the USS Helena Fast Attack Submarine which was based at Pearl Harbor, Hawaii. Patrick always admired hi Uncle Jimmy's business mastery and after leaving the military began his quest to be a successful businessman. He attended the University of Hawaii where he received a BA Business/Minor in Music Theory. Patrick then moved back to San Diego where he received management training from many retail establishments such as Target and Circuit City. From there his business career expanded into banking. He spent many years climbing the corporate ladder at Wells Fargo Bank. His luxuriant corporate experience moved to Mission Federal Credit Union where he received many accolades such as: National Association Business Development Person of the Year, and Professional Business Partnership Professional of the Year.

In 1995, Patrick met Christina Marie Obregon and they married in 1998. Soon after they moved to Las Vegas, Neveda where they purchased a home and began their life together. Patrick moved back to San Diego after he and Christina parted but remained close friends. Patrick regained his music career as the famous DJ Supreme with extraordinary 3-style DJ's. He would DJ at local clubs and parties but was never too good to DJ at all his mother's birthday parties, his niece's high school or his niece's 6 year old birthday party.

He continued with Mission Federal Credit Union until he began to fall ill due to diabetes and heart disease. Patrick fought with his illness for many years. Patrick was rehabbing trying his best to get stronger, to get back to his fabulous life. God called Patrick home to be with him on March 12, 2020.

Receive notifications about information and event scheduling for Patrick

You will receive any future notification messages.
Print

We encourage you to share your most beloved memories of Patrick here, so that the family and other loved ones can always see it. You can upload cherished photographs, or share your favorite stories, and can even comment on those shared by others.

Posted Mar 27, 2020 at 03:14pm
My cousin Patrick oh how I remember in Ferriday Louisiana running around just carry on at our Madea's house just smiling, see Patrick and I are some years apart by age so we both always and Tiffany in my mother Liz and father Dan patio on Skyline Drive San Diego oh how much fun we had as kids dancing best in town . See it was not just Patrick and I we had a group to perform in front Aunts, Uncles, and second generation cousins. Who was part of the group? Kenny Wayne, Preston , Jennie, Raquel Tonya Tiffany my nephew Dee. And (Pierre the dog). Now all cousins had to dance almost every other weekend did we get paid for dancing? Yes 50 cents ! Well that's what my nephew Dee said, however I did not get coin! (laugh) I did not Pop lock and break dance long enough (laugh) and still waiting for my 50 cents ! Soon DJ music came into play, Patrick love to DJ he always said it was Uncle Dan had him interested in Dj music. And Patrick was our Dj of the family. Oh Patrick heart is so big, his love so pure, humble, a great sense of humor (comical) and that smile. When I come home to San Diego, Patrick and Tiffany never hesitate to say cousin you need a ride from the Airport, Train ,Boat, Trolley ,Bus, oh did I say a ( Boat). Football days at uncle Dan's house( Patrick), chicken wings cooked by uncle Dan at the park (Patrick). My heart is so heavy with sadness ,I'm not able to hear (What up cuz) ! or thank you cuz for wishing me a Happy Birthday. Patrick physical being is not here but his spirit is all around our family and friends. What Patrick and I favorite song " Do it right Do it ! " By Rodger and Zapp Band.
Love you Cousin Patrick. The Angels opened the door for another to walk in. 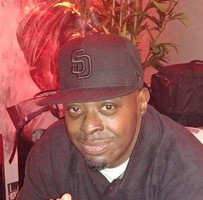