To share your memory on the wall of Michael Platter, sign in using one of the following options:


Michael (Mike) Dennis Platter, a California Native resident, who was an Ironworker/Welder with Local Union 229, passed away August 19 at the age of 69.


Michael (Mike) Dennis Platter, a California Native resident, who was an Ironworker/Welder with Local Union 229, passed away August 19 at the age of 69.

Mike grew up in the East San Diego County area graduating from El Cajon Valley High School where he played football and was known as ‘Big Mike’ by his classmates, towering 6’2”. After high school, he became an apprentice with the San Diego Ironworker Union Local 229 starting in 1974. He became a sought-after welder for most of his career. He has been creatively teaching the next generation of apprentices since 1999, including becoming the resident CPR instructor. Mike was a devoted father and a constant cheerleader to everyone he loved. He would often call his family for pep talks and to get the ‘scoop’. Mike had an infectious giggle and his bright blue eyes always had a twinkle. He proudly watched his grandchildren’s sports games on the weekends and loved family trips. He was the best at being the giver of sugary treats aka ‘zoom zooms and wham whams’. He was loyal to his family and friends and was the ultimate protector. Mike liked the thought of having a tough exterior, however after a few minutes people realized he was a big teddy bear with the warmest heart. He was an authentic soul who would tell the truth even if it was something hard to hear. He leaves behind several nieces, nephews, great nieces and great nephews. Most importantly he leaves behind his beautiful wife of 20 years, Jeanne, who he adored.
Ultimately Mike loved his Lord and Savior, Jesus Christ and we are comforted by knowing he is in the hands of the Father and we will be reunited again someday.
A celebration of life will be held Saturday, August 22nd 11-2 pm @ the SD Ironworker Training Center 3888 Beech St. San Diego, 92105
Read Less

Receive notifications about information and event scheduling for Michael

We encourage you to share your most beloved memories of Michael here, so that the family and other loved ones can always see it. You can upload cherished photographs, or share your favorite stories, and can even comment on those shared by others.

Posted Aug 22, 2020 at 04:33pm
What a loss of a kind, loving & supportive husband and life partner. I always appreciated Platters welcoming smile & greetings at VB tournaments.

3 trees were planted in the memory of Michael Platter

Posted Aug 24, 2020 at 12:30am
Jeanne, Ron and I are so very sorry to have learned about your loss of Mike. We loved him and will really miss him. He was a fantastic friend and neighbor.
Comment Share
Share via:
HJ

Posted Aug 21, 2020 at 11:20pm
I am an Ironworker (local 229). Any time I would see "Platter" , always brought a smile to my face. I could ALWAYS count on "Platter" to give it to me straight...made me see things from angles I may never have considered (good or bad). He is my brother, and he will be extremely missed. I will never take for granted the time he gave or the knowledge he shared. RIP Platter . My deepest condolences to the family. 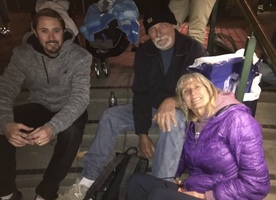