To share your memory on the wall of William Berg, sign in using one of the following options:

Over the years, the family shared many laughs and fun, and some of the best
memories were of the family trips. There was always humor surrounding him.
He loved to joke, and always was willing to laugh at himself. His greatest joy
came from family, friends, and the fellowship of the church.

After working continuously for 72 years, Bill retired in 2016 at the age of 86.
Bill and Barbara recently celebrated their 68th Wedding Anniversary in June.

Bill is known for his smile, positive attitude, compassion, and for always
wanting to make a positive impact. He has infused in us how to live with
gratitude and a passion for life.

Bill is survived by his wife Barbara; daughters and spouses: Patty and Dennis,
Lindee and John; and grandchildren and spouses: Dena and Jason, Cameron
and Amanda.

Receive notifications about information and event scheduling for William

We encourage you to share your most beloved memories of William here, so that the family and other loved ones can always see it. You can upload cherished photographs, or share your favorite stories, and can even comment on those shared by others.

Plant a Tree in Memory of William
Plant a tree 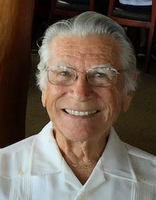