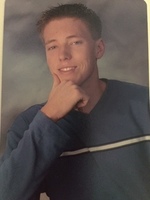 Shayne was born and raised at his home in Alpine, California. He attended elementary and middle schools there and in 1991, earned a degree from Granite Hills High School in El Cajon. A die hard Alpine native, Shayne remained a steadfast “native son,” working at either the “Med” or Alpine Fence after graduation.

Shayne’s passions included any pursuit that involved being outdoors. He enjoyed off-roading (too often in vehicles that were not specially designed for that purpose) and anything that involved being in or under the water. Accompanied by his lifelong friend John, he made many dives to shipwrecks off the coast of southern California.

Shayne’s creative side was most apparent in the kitchen. His love for cooking included the uncanny ability to create some of the hottest (i.e. spiciest) dishes imaginable, but more often he had the knack of preparing restaurant worthy meals using only the blandest of ingredients.

Shayne is survived by his father Kirk, his sister Tyla and her husband Soner, his brother Drew (Chuck), his niece Elani as well as numerous aunts, uncles, cousins and friends. He was preceded in death by his mother, Andy Smith.

For those wishing to send a memorial gift, the family requests that you make a donation to any substance abuse program or foundation who’s purpose it is to provide rehabilitation and counseling for those suffering and dying from the senseless and crippling disease that is addiction.

No services or celebrations are being planned at this time. Any future events will be announced by the family.

Having medication on-hand, such as Naloxone, can save lives. According to the National Institute on Drug Abuse, Naloxone is a medicine that rapidly reverses an opioid overdose. Naloxone can be given as a nasal spray or it can be injected. The nasal spray form can be easier for family members to use. Families with loved ones who struggle with opioid addiction should have naloxone nearby; ask their family member to carry it; and let friends know where it is. Naxolone is available through insurance, and is available at many pharmacies without a prescription. https://www.drugabuse.gov/publications/drugfacts/naloxone