To share your memory on the wall of Robert Maire, sign in using one of the following options:

Provide comfort for the family of Robert Maire with a meaningful gesture of sympathy.

Robin Maire loved and was loved. This is his major accomplishment. He was a man of relationships. He and his wife enjoyed 43 adventurous married years together. They raised their children in San Diego, having escap... Read More
Robert (Robin) Maire

Robin Maire loved and was loved. This is his major accomplishment. He was a man of relationships. He and his wife enjoyed 43 adventurous married years together. They raised their children in San Diego, having escaped the cold Minnesota winters. In the best health of his life, Robin died doing what he loved most, hiking. His last gesture was a “Thumbs Up” to his ten year old grandson, Tristan, at the top of Cowles Mountain, the highest peak in San Diego . There was no warning, no time to say "Good Bye”. Although our hearts ache and we miss him so much, the Lord took him according to His plan. As a friend imagined it, Jesus stood with open arms to welcome Robin into Heaven. This is our faith, our hope and our comfort.

Robin leaves behind his wife Chris; his sister Margee; his brother Rich; his children Lauren and Alex; his honorary children Tony and Monica; grandchildren Aedan, Tristan, Audrey, Bailee, Ruby and Lucy, as well as nieces, nephews, other relatives and friends. Robin loved spending time with his family and friends, most recently with Luc and Caroline, Steve and Erin, Julie and Bob, Robin and John, and Tristan. Through the years in San Diego, Robin’s favorite activity with the kids was swimming in the backyard pool. He became "Robin the Whale" so they could ride on his back. He planned family camping trips with friends in the western states and Mexico. Baja was an annual trek during Easter break. He knew how to make things fun.

A man of many interests, Robin was always an outdoorsman. in addition to hiking, Robin enjoyed biking, camping, watching his garden birds, flowers and all of nature. He was a thinker and a dreamer. He was sentimental and often he would sit teary eyed during a movie or a moving tribute to one of his heroes. He enjoyed rock music and reverent hymns, the Seahawks, Trojans and Ducks, REI and Patagonia, Fox News, his smartphone and gadgets, photography, travel, taking and posting photos on Facebook and always drinking coffee from his “perfect” coffee thermos.

The first child of Robert Maire and Glendora Garvik, Robin was born on June 3, 1946, in Perham, Minnesota. When he was around eleven years old and his brother Rich was five, he often pulled Rich in a wagon to a country field, where they camped overnight, returning home for more of his mom’s sandwiches. Robin called these years in Browns Valley “The Wonder Years”. He earned money selling night crawlers, cleaning fish and baling hay. His sister Margee said the farmers liked him because he was young and strong. Summer jobs in college included selling women’s shoes, fighting forest fires out west and selling Bibles and dictionaries for The Southwestern Company. This segued into entrepreneurial ventures in school fundraising. Eventually, he put together his own product lines, beginning with birch planters. Later, Robin created a unique lollipop CandyGram, and the Maredy Candy Company was born. He liked to involve the children and friends as models in his catalogs and to get their opinions of products. Eventually, he came up with a complete catalog of wrapping paper, candy and other food, household goods and gift items. When Robin sold the company in 2017, he began to devote more time to his health and fitness and to imagine possible future creative ventures.

Robin never wanted to trouble others with a long illness, and God granted his wish. He died doing what he loved in the company of one of his beloved grandchildren.

Receive notifications about information and event scheduling for Robert

We encourage you to share your most beloved memories of Robert here, so that the family and other loved ones can always see it. You can upload cherished photographs, or share your favorite stories, and can even comment on those shared by others.

Bob and Julie, Lance, Cathy, Myron & Sandi, and others have sent flowers to the family of Robert Lee Maire.
Show you care by sending flowers

Posted Oct 19, 2019 at 09:49pm
We are so sorry about Robin. Everyone is in our hearts and thoughts. Love Pete, Maryellen, Emilia, and Isabella.

Gracious Lavender Basket was purchased and planted a memorial tree for the family of Robert Maire. Send Flowers

Bob and Julie purchased flowers and planted a memorial tree for the family of Robert Maire. Send Flowers

Posted Oct 17, 2019 at 12:56pm
What can we say? Just heartbreaking to lose such an amazing man, great friend, travel buddy, and beautiful person. Our sympathies to all of his family and friends. One of my personal best experiences is when Robin and I challenged each other and did our very first Zip Line in Kauai (while Chris and Lance went shopping!) Will never forget it. Will never forget his and Chris's generosity to our family when we were in crisis so many time ourselves. Sending comforting hugs and many prayers to Chris, Alex, Lauren and all the grandkids.
Comment Share
Share via:
LS

Posted Oct 17, 2019 at 12:13pm
Wishing you peace to bring comfort, courage to face the days ahead and loving memories to forever hold in your hearts.

Posted Oct 14, 2019 at 08:24pm
Robin and Chris stayed with us in Browns Valley and we so enjoyed them and their visit! We are sure Robin and Gerry Bretzke are sharing lots of memories in Heaven. Robin did pictures for Gerry's memorial service and we still have our calendar. Wonderful guy! So glad we shared some wonderful memories with Robin and Chris! Please know you are in our thoughts and prayers, Chris!
Comment Share
Share via: 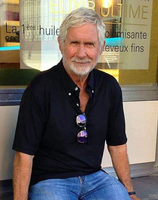