To share your memory on the wall of Mary Cooper, sign in using one of the following options:

Francie and Jim shared 54 years of wedded bliss, and along the way she became a mother to three loving children, Amber L. Nelson, M. Todd Cooper, and Samantha M. Hansen, and two wonderful daughters-in-law, Nichole L. Cooper and Laurie C. Nelson. Additionally, she was a grandmother of six delightful grandchildren, Steven, Kyrsten, Ashlee, Aaron (Paige), Olivia, and Jay, and great-grandmother to Barrett, born this month to grandson Aaron and his wife Paige.

In addition to her parents, Francie was preceded in death by her sisters Sarah Sims and Edith Boggs. She is survived not only by her husband, kids, grand- and great-grandkids, but also her mother-in-law Fern Marie Belden, sisters-in-law Theresa Newton & Donna Disciscio, best friend and chosen sister Mary Power Siddell, and several nieces, nephews, and cousins.

Unfortunately, no services will be held at this time. However, a Celebration of Life will be held in August in San Diego, CA. Those who wish to remember Francie (Mary) in a special way are asked to share your fond memories of her on her Facebook page, and/or, if you wish, make a gift in her memory to the American Lung Association or the charity of your choosing.
Read Less

Receive notifications about information and event scheduling for Mary

We encourage you to share your most beloved memories of Mary here, so that the family and other loved ones can always see it. You can upload cherished photographs, or share your favorite stories, and can even comment on those shared by others.

Plant a Tree in Memory of Mary
Plant a tree 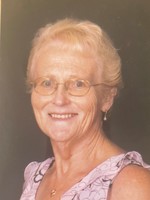