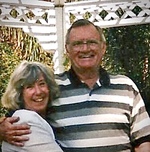 It is with great sorrow we announce Donald Charles Van Tieghem, age 90, a long time resident of El Cajon, has passed away peacefully at home on April 27, 2022

Donald was the oldest son of Camiel and Mary Coopman Van Tieghem. He was born in Moline, IL on February 26, 1932.
After graduating from Coal Valley High School, Don joined the Navy and served from 1951-1954.