To share your memory on the wall of Colleen Watkins, sign in using one of the following options:


Colleen Crystal was born in Rigby, Idaho and raised on a farm with her grandparents. She moved to San Diego in 1935, and graduated from Hoover High School in ... Read More
Colleen ‘Cody’ Watkins
April 19, 1925 April 30,2021


Colleen Crystal was born in Rigby, Idaho and raised on a farm with her grandparents. She moved to San Diego in 1935, and graduated from Hoover High School in 1942. She met the love of her life, Floyd R Watkins at Ratliff’s Ballroom, and they were married on November 2, 1944. In 1951 They moved to El Cajon and after a failed start in business, Floyd, Colleen and their three kids moved into a fruit stand at 1019 East Main Street in El Cajon. Instead of fruit and vegetables, they sold trailer supplies and named their business Valley Trailer Supply. Colleen worked six days a week and Floyd often worked seven.

Later they built a new store at 1540 East Main Street and there opened Rancho Mobilehome Sales. After decades of hard work they retired and did some traveling. Floyd died in 1998, but Cody found new life in relandscaping and remodeling their home at 1943 Brookhurst Drive (across from Granite Hills High School, where her three children graduated).

The family was very active in The Church of Jesus Christ of Latter-Day Saints, and Cody served in a number of positions. She died peacefully of natural causes at home with her family all around her.

She is survived by her three children: Joyce Colleen Watkins, John Floyd Watkins and Shirley Ann Watkins. Her Legacy is added to with five grandchildren and 10 great grandchildren. Cody was well known for her sense of humor, a positive attitude and a generous nature.
Read Less

Receive notifications about information and event scheduling for Colleen

We encourage you to share your most beloved memories of Colleen here, so that the family and other loved ones can always see it. You can upload cherished photographs, or share your favorite stories, and can even comment on those shared by others.

Posted May 07, 2021 at 04:03pm
Our beloved Watkins, we send our love for you and our admiration for your dear mother. May the comfort of our Savior attend you in the days ahead.

The Ludlow Family purchased the Loving Lilies & Roses Bouquet for the family of Colleen Watkins. 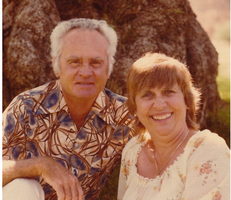